Your largest choice of self-drive boating holidays throughout the canals and rivers of Southern England. No previous boating experience necessary.

Canal Boat Holidays on the Southern Canals and Rivers 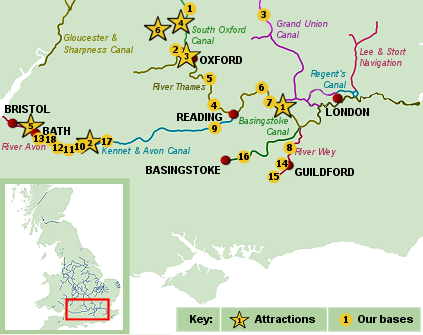 
There are so many things to do on the canals & rivers of Southern England on a boating holiday. You can hire a barge and cruise into the historic city of Bath, or navigate a narrowboat towards the dreamy Oxford Spires. If you fancy a more modern mode of transport, hop on board a motor cruiser from Windsor and motor down the bustling River Thames.


There's such variety of history, scenery and attractions to experience in Southern England, there is something to suit every party. You can opt for an active break powering over the Caen Hill Flight and head to Bath. Or a relaxing float with the ducks on the picturesque Basingstoke Canal, mooring to pick some blackberries by the towpath.


If you want to stay local and explore your region on a boating holiday, or if you are coming from a little further afield, there is a waterway for you on the canals and rivers of Southern England.

Windsor Castle: Visit the Royal Castle in Windsor, watch the changing of the Guards and explore its rich history.

Caen Hill Flight: A flight of 29 locks on the Kennet & Avon Canal just West of Devizes. Climb up this energetic flight, just a short distance from Bath.

Oxford: Explore the 'City of Dreaming Spires', brimming with historic architecture, set amongst the picturesque scenery of the Cotswolds.

Rousham House & Gardens: Visit this impressive stately home, picnic in the classical English gardens, which can be seen from the South Oxford Canal.

Bath Spas: Well worth a visit by foot, explore the Roman Baths Temple and bathe in the warm mineral rich waters at Thermae Bath Spa.

Blenheim Palace: Take a tour of the palace, exploring the many stately rooms and the peaceful gardens, stopping for lunch at the waterfront cafe.

The Kennet & Avon Canal is the longest Southerly broad canal running between Reading on the River Thames at its eastern end to Bristol's floating harbour in the West. In Bath, the canal meets the River Avon and at Reading the first part of the navigation is shared with the River Kennet.

Kennet & Avon canal boat hire offers boaters the chance to navigate the Caen Hill Flight and Avoncliff Aqueduct, visit the Claverton Pumping Station and the historic City of Bath, just some of the canal's many highlights. This canal offers scenic cruising through villages built of warm Cotswold stone - it's worth a stop in Devizes with its medieval buildings. Also visit the village of Pewsey with its half-timbered houses, pass through the Severnake Tunnel, Crofton steam pumping station and navigate through the only grass sided lock on the network, 'Monkey Marsh Lock'. From around Kintbury the River Kennet joins and leaves the canal several times before finally coming out on to the River Thames at Town Lock in Reading. Moorings in Reading are really handy for the town centre shopping which is very good.

This narrowbeam canal with its well spaced locks and very well maintained towpath allows you direct access to Oxford City Centre as well as navigating through the pretty Oxfordshire countryside, dotted with its many easy to operate lift bridges. Cruise past the many quaint South Oxfordshire villages with their Cotswold stone houses and waterside pubs and through the larger towns such as Banbury, offering many shopping and tourist attractions. At Napton Junction you connect to the Grand Union Canal and can decide which direction to take your narrowboat on the central England waterways. You can join the North Oxford Canal at Braunston turn, where you may like to moor for a bite to eat on the waterfront. The South Oxford Canal is a contour canal, so instead of many locks the route follows the natural contours of the land sometimes giving the impression that you are actually heading in the wrong direction as the canal twists and turns around the hills. You will still get some exercise though as you jump on and off the boat to raise the numerous lift bridges that bisect the canal. Every August a huge outdoor folk festival is held at the small village of Cropredy.

Boating holidays on the Thames allow hire boats to navigate from Lechlade in the Cotswolds all the way through past Oxford, Henley and Windsor. Offering a mixture of rural and city cruising, this waterway is suitable for every party. The locks are manned by lock keepers, offering a relaxing cruise through the countryside of Oxfordshire, into the suburbs of Surrey.

Hirers are able to navigate as far as Teddington below which the river becomes tidal so cruising down beyond Brentford is not permitted to hire boats.

We have a choice of boat types on this mighty waterway, narrowboats, modern cruisers and wide beam boats (or barges).

Boat hire on the River Wey Navigation offers a gentle cruise, meandering next to tree lined footpaths and passing a variety of Surrey villages. One of the most southerly navigations, connecting to the Basingtoke Canal and the River Thames, this picturesque waterway will take you from Godalming, into the centre of Guildford with its cobbled streets and famous clock tower. There are a good selection of pubs and restaurants here. Further on, the navigation joins the River Thames at Weybridge, just below Shepperton Lock. There are 11 wide beam locks in total on this waterway which is about 20 miles long and was one of the first rivers to be made navigable by the installation of locks, weirs and man made sections or cuts in the 1630s.

A very rural and peaceful canal, perfect for novices looking to experience a short break, where you will only need to navigate one lock, 2 swing bridges and one lift bridge, on a short break. The waterway meanders from the River Wey via Woking, Brookwood, Mytchett and Ash Vale in Surrey and then passes into the county of Hampshire, skirts around Aldershot and Farnborough and goes through the centre of Fleet where there are ideal moorings with access to the town centre boasting many pubs and different types of restaurants. This canal is a registered site of special scientific interest with many species of dragonfly and damselfly, bluebell woods and the 5 different species of bats who make their home in the disused and partially collapsed Greywell Tunnel, now a very important protected bat roost, just beyond the limit of navigation, about 1.5 hours cruise West of the village of Odiham. By the churchyard in Odiham, you can still see the village stocks and the 'pest house' where those unfortunates suffering from plague were quarantined and this simple stone cottage was lived in up until 1931 without running water or electricity. If you moor at night and put on your tunnel light you can watch the bats feeding on the insects attracted to the glow.

Britain's longest canal navigation, linking the industrial cities of London and Birmingham, cruising through countryside and numerous attractive villages, market towns and cities. There are several 'arms' of the canal that extend to different locations, including Aylesbury, Wendover, Slough and Paddington. The canal is 137 miles long and has 166 locks between London and Birmingham. The locks are well maintained and often have lovely flower borders in the spring and summer.

Originally built to bypass cruising the tidal stretch of the River Severn, cruising to Gloucester. This canal is perfect for beginners as it is completely lock free and all swing bridges along the route are worked for you. The canal was once a shipping canal and was once the deepest and broadest in the world. It is so easy to turn the narrowboats en route and so much space, allowing for a really relaxing holiday in the countryside.

Click to view the interactive map of the UK inland waterways.